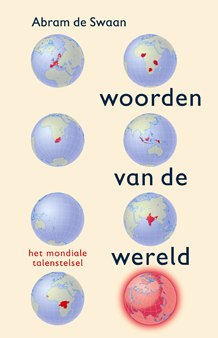 Words of the World. The world language system

There are over five thousand languages in the world, and yet humankind has still retained its cohesion.Sociologist Abram de Swaan believes that this is due to the people who speak more than one language. As a result of multilingualism, certain languages within the global system have a kind of ‘umbrella function’, serving as a means of communication between the speakers of regional languages. For the last half-century or so the ‘supercentral’ language crowning this linguistic hierarchy has been English.

In Words of the World De Swaan describes the process by which a particular language comes to occupy such a central position. The various factors which play a role in that process are illustrated by case studies focusing on the rivalry between Hindi and English in India; the triumph of Malaysian over the former colonial language – Dutch – in Indonesia, contrasted with the persistence of other colonial languages – French and English in Africa –; the complex linguistic regime in South Africa following apartheid; and the only slightly less complicated linguistic situation within the European Union.

All these various scenarios are governed by the same underlying rules. According to De Swaan, it is not until languages come to be regarded as economic goods that it becomes clear what makes these supercentral languages so appealing. Like other ‘hypercollective goods’ (cable networks, for example), the value of a language increases in proportion to the number of new speakers. An ‘invisible hand’ guides an ever more intensive process of concentration, in which a central role is reserved for a small number of languages with maximum communicative value. De Swaan shows that that number is fairly simple to calculate.

Words of the World is a pioneering book, in that in combines the insights of sociology, sociolinguistics and economics to demonstrate that the concentration in the direction of the super-central languages is both a rational and an undirected process. It is also a provocative book, because it presents this development as a momentous opportunity for human communication, rather than as a threat to the peripheral regional languages.