Dutch Welfare Reform in an Expanding Europe: The
Neighbours' View" 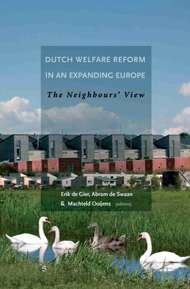 The sustainability and architecture of today’s European welfare states and social security systems are under pressure. In addition to general trends such as individualisation, ageing and migration, the very process of European integration and globalisation urges welfare states to reform.
In this collection of essays fi ve leading foreign welfare state experts refl ect on the nature of the Dutch welfare state in a changing Europe. Comparative commentary from abroad brings policy wisdom as well as illuminating asides about national debates. These illuminating refl ections of experts from neighbouring countries (Germany, France, the United Kingdom and Belgium) and the US on various aspects of the Dutch welfare state, such as social security, labour market policy, health care and immigration, carry the intellectual discussion on a pressing political issue across borders.
In this way this book contributes to the political debate on the future of the welfare state in the European context. The whole lattice offers an interesting and provoking mosaic of the Dutch welfare state during the past two decades. At the same time, it reveals the important questions and dilemmas it will have to cope with in the years to come. The observations and insights enrich the debate about the future of social policy in The Netherlands and in the Europe Union as a whole.